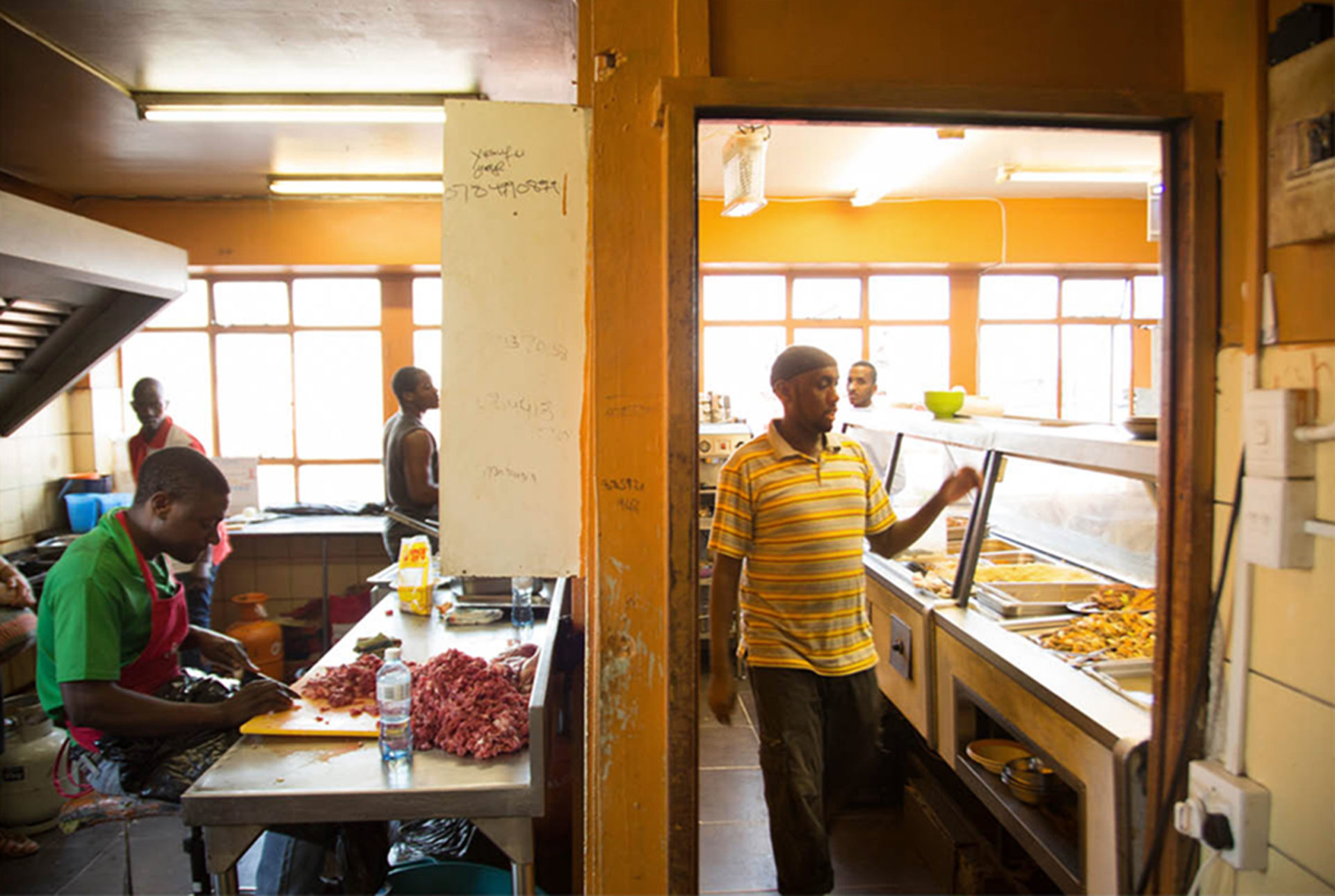 When it comes to food, you can start with whatever you have. Even if it’s just enough to buy two eggs. You can boil them and go to the street and sell them. Slowly you work your way up. We help each other here. That’s how it works,” says Fatima. She was born in Somalia but now runs a small kiosk in Belleville, also known as Somali Town, in Cape Town.

Stepping out of the car in Somali Town is like crossing a threshold into a different city. Though it is a mere 15 minutes’ drive from downtown Cape Town with its hustle and bustle, it seems far away.

Repeated waves of xenophobic violence have swept across South Africa in recent years. Human Rights Watch estimates that in April 2015 alone, more than 2,900 people were internally displaced because of the violence. As a result, migrants have gathered together to form their own communities – Somali Town is one of these.

In the midst of the tension, between the shadows of crumbling apartment buildings and the flickering glow of fluorescent strip lights, these run-down inner-city blocks have become a rallying point and a place to belong. In South Africa, communities such as Somali Town serve as platforms for re-establishing some sense of normality, in a country where migrants face threats of violence and lack access to state support.

And globally, migration is at an all-time high. Now more than ever, people move across the planet, sometimes searching for adventures and new opportunities, but often to escape poverty, crises, and conflicts. Increased migration inevitably affects social and economic systems, creating both challenges and opportunities for society. 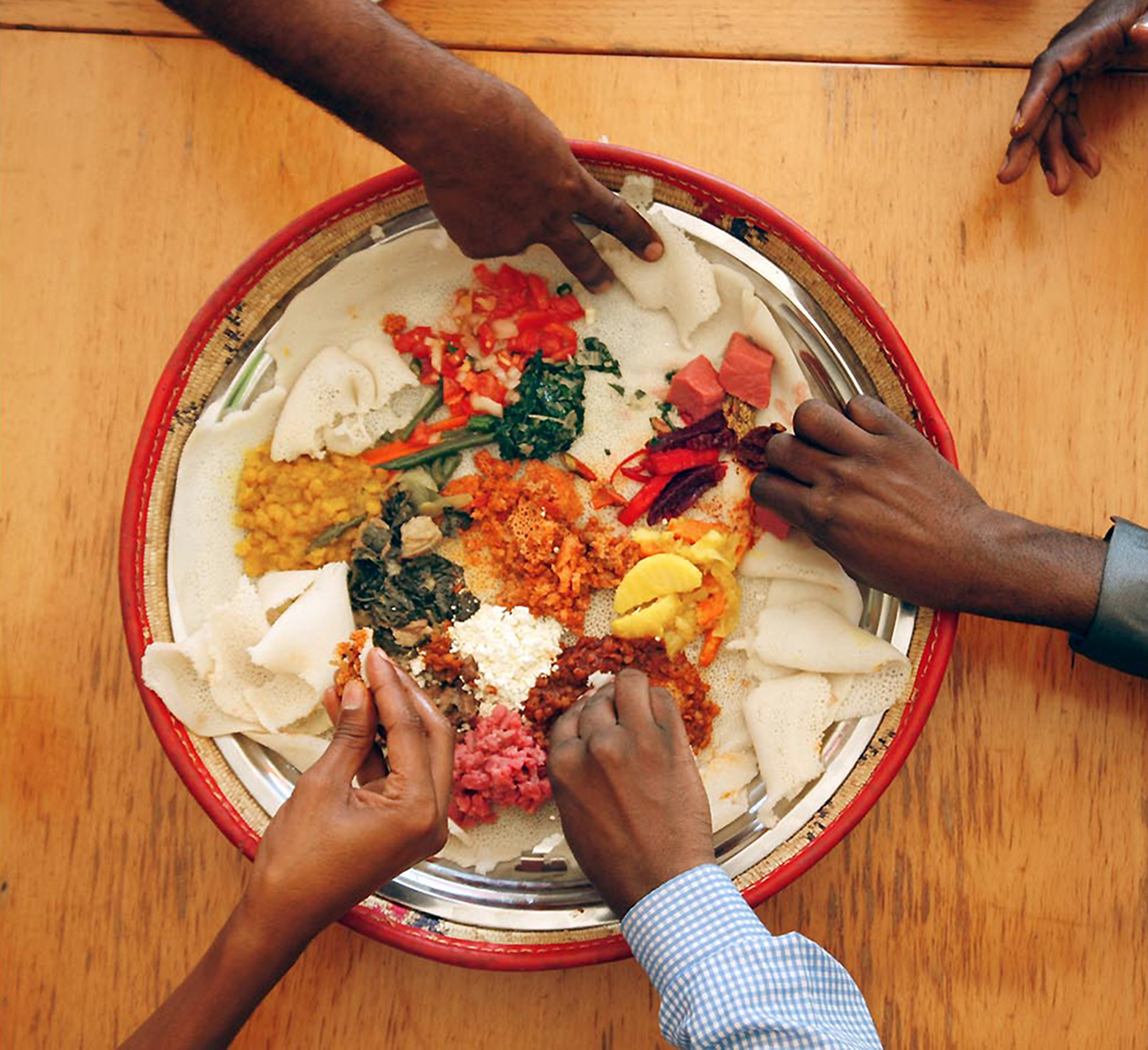 Soul food: Injera, typically not made to be eaten alone, is an invitation to come together. Copyright: Luke Metelerkamp.

The informal food economy, which falls outside official regulation, plays a key role in many migrants’ lives, as it offers opportunities for livelihoods and a way to stay connected to families and communities far away. The International Labour Organization estimates that the informal economy accounts for 85% of all jobs in Africa and that especially vulnerable and marginalised groups, including women and children, often find it is their only livelihood option.

In/Between is a project that uses a collection of film and photography to explore the role of food in memory, migration, and livelihoods in Somali Town. Through interviews with migrants, the project raises questions around our understanding of informal livelihoods and remittance flows (the payments that migrant workers send to their families back home) that support millions of families globally.

Migration and remittance flows in the 21st century

Driven by conflicts, climate change, environmental degradation, or the search of a better life, these numbers are on the rise.3 3. Connor P. 2018. International migration from sub-Saharan Africa has grown dramatically since 2010. PEW Research Centre. Link See all references People are on the move, and money flows along their migration paths. The annual global remittance flow in 2013 exceeded foreign aid funding worldwide – US$350 billion versus US$130 billion respectively.4 4. Bodomo, A. (2013). African diaspora remittances are better than foreign aid funds: diaspora-driven development in the 21st Century. World Economics Journal. 14. See all references Global remittances have become central to questions of global development funding.

However, with rising levels of unemployment in Africa and Europe5 5. International Labour Organisation (ILO) 2017. Global unemployment expected to rise by 3.4 million in 2017. International Labour Organisation. Link See all references and tensions around migration, migrants may find it increasingly difficult to find work abroad in future. Considering the scale of remittance flows, the ability of migrants to settle in safety and establish basic levels of livelihoods affects people across the globe.

Small enterprises in the informal economy play an important role in migrants’ survival strategies, and the prevalence of food-related businesses within this economy warrants attention. A study from 2016 showed that more than half of 10,000 small businesses in the informal economy in South Africa sell food or beverages.6 6. Petersen L, Charman A & Kroll F (2017) Trade dynamics in Cape Town township informal foodservice – a qualitative and supply chain study, Development Southern Africa, 35:1, 70-89. DOI:10.1080/0376835X.2017.1412297 See all references

A small kiosk owner, speaking on condition of anonymity, recounts how she fled Somalia with nothing but the clothes on her back. Without a passport or money, she made the 8,000-km journey, illegally crossing countless borders to end up in Cape Town. An informal network of Somali safe houses supported her through the journey. The network reflects the same spirit of solidarity that helped her set up a food kiosk in Cape Town on arrival. She now earns just enough to send money back to Somalia to support her two children, and her eyes light up as she recounts her mother’s recipes that form the basis of her trade here. 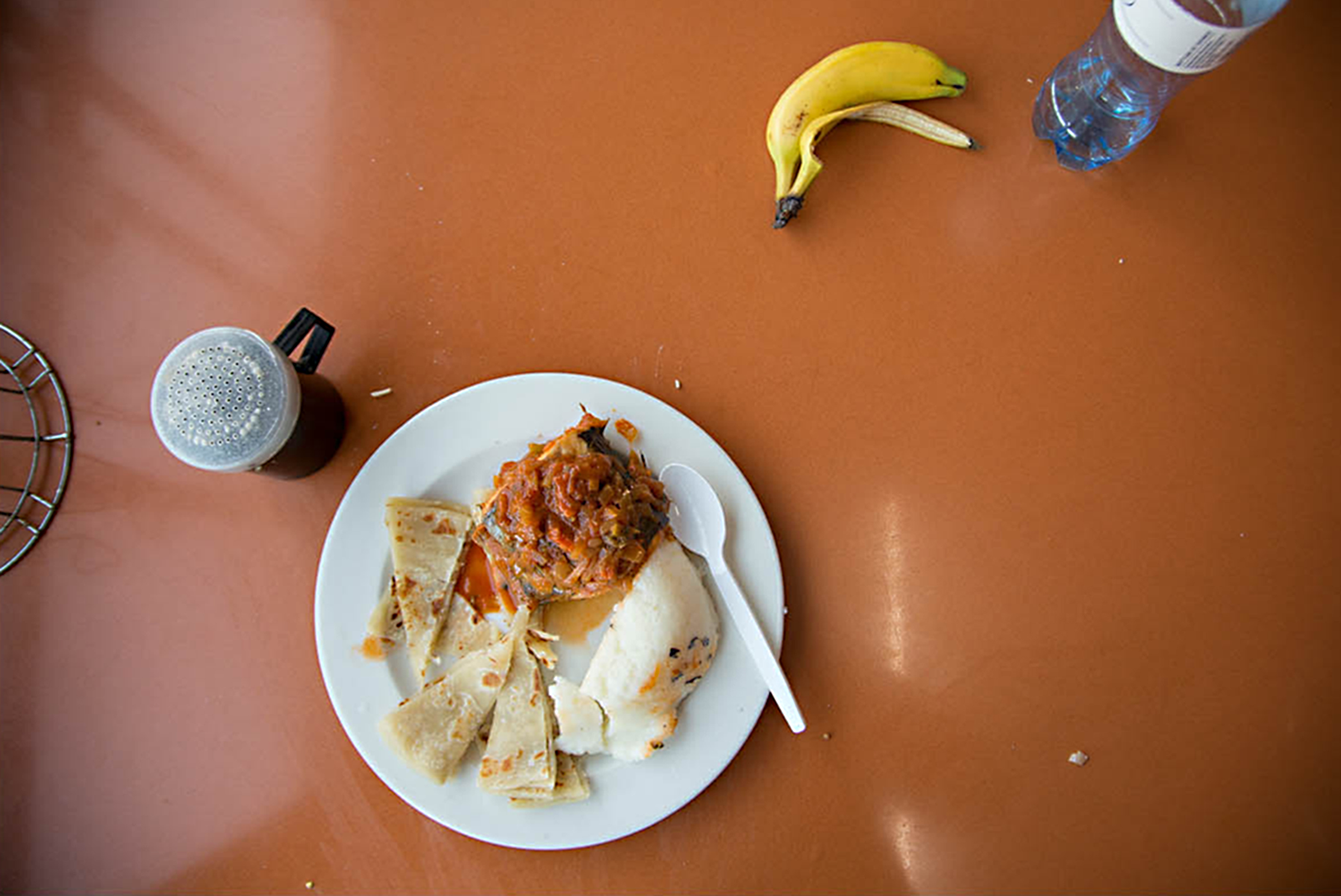 Unfortunately, this ability to overcome adversity and band together in harsh environments is fuelling resentment towards Somali traders in South Africa. Collective buying power and sharp business practices are creating competition for local traders, forcing some out of business. A report from the Sustainable Livelihoods Foundation warns that “price competition and ‘jealousy’ have resulted in tensions and conflict between South African and foreign shop keepers”. This competition between small (locally operated) and larger (immigrant operated) businesses has resulted in many South Africans closing shop and immigrant entrepreneurs increasingly dominating the sector.

To steer away from this kind of competition, researchers suggest that there is a need for better regulation of the informal employment sector. Policies are needed to limit the practices that force family-run survivalist businesses to close.7 7. Hartnack A. & Liedman R. 2016. Factors that contribute towards informal micro-enterprises going out of business in Delft South, 2010-2015: a qualitative investigation. REDI3x3 Working paper 20 October 2016. See all references A recent report from the International Labour Organization also emphasises that many of those employed in the informal sector lack social protections, workers’ rights and decent working conditions.

There may also be a role for local government and civil society organisations to act pre-emptively to mediate conflict between local traders and newcomers. For example, arts-based forms of dialogue (such as Empatheatre) can help build empathy and understanding, deconstructing notions of “them and us”.

However, framing this only as a tension between local residents and migrants would be short sighted. There are broader shifts taking place in the food system.8 8. Reardon, T., Timmer, C.P., Barrett, C.B. and Berdegué, J., 2003. The rise of supermarkets in Africa, Asia, and Latin America. American journal of agricultural economics, 85(5), pp.1140-1146. See all references Migrant traders may bear the brunt of local frustration around informal trade, but at the same time large national and international retail chains are rapidly establishing in townships. A market dominated by big players can also force smaller businesses to close down. To address the potential conflicts, there is a need to consider how businesses currently in the informal economy can be supported.

Questions arise about how to address issues of economic power in the context of high inequality, as well as how economies can be structured so that capital stays in vulnerable communities through local businesses, rather than supporting a retail system where profits in large retail chains leave the local area.

Robert arrived from Kenya in 2010 and works six days a week in a Somali-owned restaurant in Somali Town. He came with a group of people during the World Cup and decided to stay. “Arriving in Cape Town, I was so excited to see this place I heard of as the ‘land of honey’. But it was not exactly what I expected. Life challenged me and forced me to build my future myself… I had to start from scratch,” he says.

However, not everyone is as comfortable sharing their stories. Misrak is originally from Ethiopia and came to South Africa in 2002. “Of course, I left the country for political reasons, but I don’t really want to go into that.” She smiles and looks away to indicate the end of that discussion. She says she is happy to be able to serve and eat food from her home country, and she enjoys the service industry and meeting people: “That missing or longing you get for home – a good meal cools it down.”

The role of food for development

Countless narratives like these, of individuals who left their homes but still support family members that stayed behind, personify how social tolerance in stable economies is linked to economic and social well-being in regions in crisis. On closer inspection, the migrants’ stories illustrate how the informal food economy is linked to remittance flows all across the continent of Africa, connecting some of the wealthiest parts of the African continent with some of the least stable and war-torn regions.

And unlike the formal food industry, the informal food economy serves as an important social safety net of last resort for migrant communities. It is central to building resilience among vulnerable communities and the global social networks they support. Beyond the economic importance of the informal food economy, the stories also highlight how food brings people together and explore the universal love of a home-cooked meal, celebrating the simple act of coming together to eat, and the power this holds in bridging perceived gaps between people and cultures.

Insights around this dual role of the informal food economy highlight the need to consider the economic importance as well as the social values of food, in the places people leave behind and in the communities they arrive in.

The ways in which we eat and produce our food are unsustainable from both environmental and public health perspectives. We need to see a drastic and inspirational shift in the world's food system.

Ethiopia’s first communal seed bank is an example of the power of genetic diversity to shield humans from environmental crises. But threats to the seed banks loom with the industrialisation of agriculture.