Of course, it is difficult to make predictions, especially about the future, as the Danish proverb goes.

Part of the difficulty is that we – individuals and the institutions that allow us to act collectively and in the long term – routinely assume the future looks very much like the past. Just as routinely, though, this assumption is flipped on its head. Think of the global financial crisis, the Arab Spring, Brexit, or the recent US election.

But what if we already know what we want the world to look like in 2050. How do we get there?

I was reminded of the Danish proverb as I arrived at the International Institute for Applied Systems Analysis (IIASA) outside Vienna earlier this month for a three-day meeting of The World in 2050 (TWI2050) initiative. This was the third such scientific meeting hosted here at the home of some of the leading economic, demographic and energy modellers.

TWI2050 is arguably the most ambitious research being undertaken in the world today. At its heart is an ambition to map out the pathways for a sustainable planet. As with the previous meetings, it attracted about 130 complex-systems thinkers and computer-modelling experts.

Unlike other international modelling initiatives, TWI2050 was not created to explore a range of possible utopian to dystopian scenarios focusing on energy prices or climate change. The baseline assumption is a single scenario: successful completion of the Sustainable Development Goals (SDGs), agreed by all nations in 2015, and arriving in 2050 with a global economy operating within planetary boundaries – the limits of natural systems that keep Earth in a relatively stable state, relating to climate, biodiversity, deforestation, and fertiliser use, among others.

The 17 SDGs and their 169 targets are extremely ambitious. Buried in the detail are many trade-offs but also potential win-wins. Meeting the climate goal means reducing greenhouse-gas emissions to zero, and this could affect the energy, biodiversity, or consumption goals either positively or negatively. The goals and their inherent trade-offs are already catalysing research1-3 1. Nilsson, M., Griggs, D., Visbeck, M. 2016. Policy: Map the interactions between Sustainable Development Goals. Nature 534:7607 PDF for download 2. Nilsson, M., Griggs, D., Visbeck, M., Ringler, C. 2016. A draft framework for understanding SDG interactions. ICSU - International Council for Science. PDF for download 3. Stafford Smith, M., et. al. 2016. Integration: the key to implementing the Sustainable Development Goals. Sustainability Science DOI:10.1007/s11625-016-0383-3 See all references and the results show how challenging this will be.

This month, scientists publishing in the journal Nature4 4. Gao, L. Bryan, B.A. 2017. Finding pathways to national-scale land-sector sustainability. Nature 544:217–222 DOI:10.1038/nature21694 See all references explored Australia’s land-use trade-offs to reach the goals. The team, who were not at the TWI2050 meeting, used a massive computer simulation called Land Use and Trade Offs (LUTO)5 5. Bryan, B.A. et al. 2016. Land-use and sustainability under intersecting global change and domestic policy scenarios: Trajectories for Australia to 2050. Global Environmental Change 38:130–152 DOI:10.1016/j.gloenvcha.2016.03.002 See all references to see how factors such as climate policies or crop prices could shape Australia’s landscape by 2050. Exploring 648 scenarios, researchers Brett Bryan and Lei Gao found just 1% of scenarios achieved five goals simultaneously. However, some goals seemed to go better together than others. Achieving targets related to food, water, and biofuel production was possible in 6.5% of scenarios, for example. The authors, whose work contributes to Future Earth’s Global Land Programme, conclude that national policymakers need more of this type of analysis to elucidate trade-offs and avoid conflicting policies. Moreover, they argued for more scientific coordination internationally for a global perspective on implementing the SDGs.

Their work, which also supports the Global Land Programme, concluded that it was possible, but would likely mean low meat, vegetarian, or vegan diets globally. Meanwhile, Marco Springmann from the Oxford Martin Programme on the Future of Food, also attending, and colleagues showed that by 2050 a global vegetarian diet would reduce diet-related global mortality by 6-10% and food-related greenhouse gas emissions by 29-70% – contributing to several goals7 7. Springmann, M., Godfray, H.C.J., Rayner, M., Scarborough, P. 2016. Analysis and valuation of the health and climate change cobenefits of dietary change. PNAS 113:15(4146–4151) DOI:10.1073/pnas.1523119113 See all references . This type of research is essential to understand potential win-wins but these examples do not provide the pathways to arrive at these scenarios.

Is it possible to feed 9 billion people in 2050 without further deforestation? According to recent research it is. Copyright: N. Ryrholm/Azote

All models are wrong, but some are useful

The British statistician George Box said : “All models are wrong, but some are useful”. And some models have proved highly influential. From the early days of Shell’s global scenarios and 1972’s Limits to Growth through to today’s scenario use, global economic models and scenarios have helped guide decisions in an uncertain world. Scenario planning in particular can help deal with transformative change.

Now the Intergovernmental Platform on Biodiversity and Ecosystem Services (IPBES) is developing its own scenarios connected to IPCC scenarios.

The SDGs were only agreed in 2015, and are much broader than a singular focus on, for example, climate. No existing global scenarios include successful completion of all goals and a global economy operating within planetary boundaries, creating a specific niche for TWI2050. In short, the world has agreed on a vision for the future but no one has explained how to get there yet.

The links between international scientific assessments and TWI2050 are strong. One of the leading architects of the IPCC scenarios is IIASA Deputy Director General Nebojsa “Naki” Nakicenovic. Naki has been involved in all IPCC reports since its inception and has been appointed executive director of TWI2050.

The main modelling approach Naki and the team plan to use is called “backcasting” the future. Unlike forecasting, backcasting assumes a specified end result then explores ways to arrive at the end point, rather than assuming a variety of diverse scenarios. The benefit of this approach is that model results can be easily compared if all assume similar starting and end points.

The main workhorses of the TWI2050 will be integrated assessment models (IAMs). IAMs are a particular class of economic model that allows researchers to explore complex decision-making under uncertainty and over time. These models are often used to explore land use and energy systems. While IAMs tend to look at macroeconomic scenarios, another class called agent-based models (ABMs) simulate interactions of autonomous agents – individuals, groups, organisations, or institutions. Yet another class of models, Earth-system models, looks at complex interactions between the atmosphere, land, ice sheets, and oceans, and how humans are affecting them.

All these models will be used by TWI2050, but the project is not attempting to combine them to build a giant super-model. Rather, the aim is to encourage all participating modelling groups to talk to one another and work from the same scenario so model results can be compared. 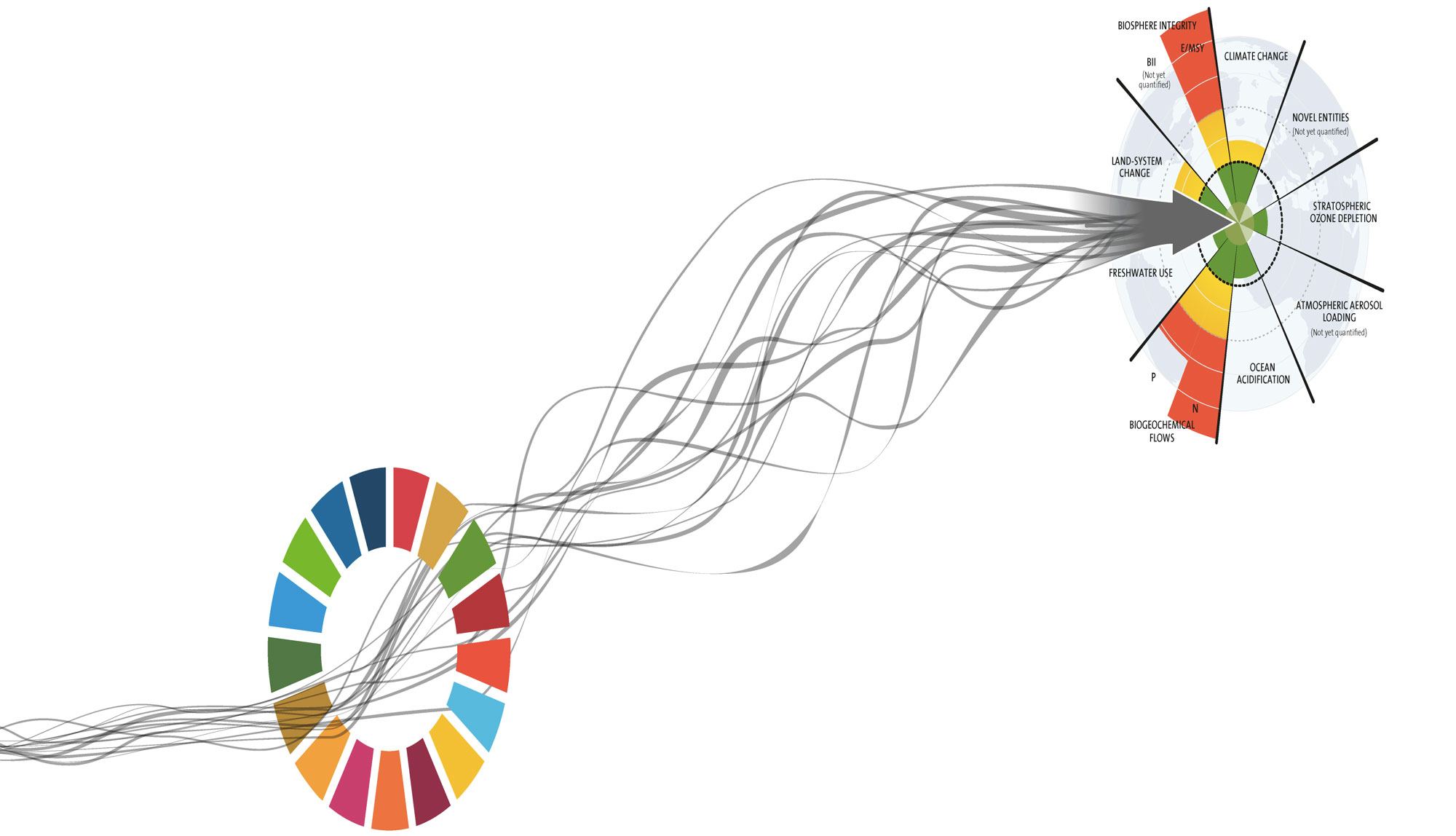 World in 2050 pathways: Meeting the SDGs by 2030 and a world economy growing within the planetary boundaries by 2050. Illustration copyright: J. Lokrantz/Azote

Even the best model cannot hope to capture all the intricacies of global development. The UN population division predicts the world population in 2050 will be between 9 and 10 billion people. Much of this growth will occur in Africa. While it is essential to take a global view of the pathways to sustainability, it is also imperative that the research groups account for regional challenges and opportunities.

TWI2050 recognises this and will hold its first regional meeting in Kigali, Rwanda later this year to work with African researchers. The organisers are committed to establishing a framework for regional modelling. This must be followed up by other regional workshops.

The TWI2050 modelling groups are under no illusion about the predictive capability of models. During the three days I spent in Vienna for the IIASA meeting, the most significant discussion centred on the balance between being useful to policymakers and producing robust results.

Jeff Sachs, director of the Sustainable Development Solutions Network and Paval Kabat, director general of IIASA, argued for immediacy. Policymakers need information right now to implement the SDGs within the planetary boundaries framework, even if the results may not be perfect (they never will be). Other modellers argued that many years of work are required to develop well-grounded robust models that capture a broad enough spectrum of pathways and can be properly intellectually defended.

All agreed with the urgency. Time is running out for industrialised nations to correct their paths and developing nations need guidance to avoid the mistakes of the wealthiest countries. The conclusion was to develop a fast-track approach to deliver some results early. These rapid results will then inform a slower, broader, deeper process within TWI2050.

So, what will the world be like in 2050? It is difficult to make technological, economic, and political predictions, especially about the future. But those who argue it is futile to plan miss the most significant point of all: we all have agency. In this new epoch, the Anthropocene, we have the possibility of creating the future we want.

*The Stockholm Resilience Centre is one of the founding partners of The World in 2050 alongside the Sustainable Development Solutions Network and IIASA. Contributing organisations include the European Commission, Future Earth, Netherlands Environmental Assessment Agency, Potsdam Institute for Climate Impact Research, Future Earth. Check out the website for details.

The ways in which we eat and produce our food are unsustainable from both environmental and public health perspectives. We need to see a drastic and inspirational shift in the world's food system.