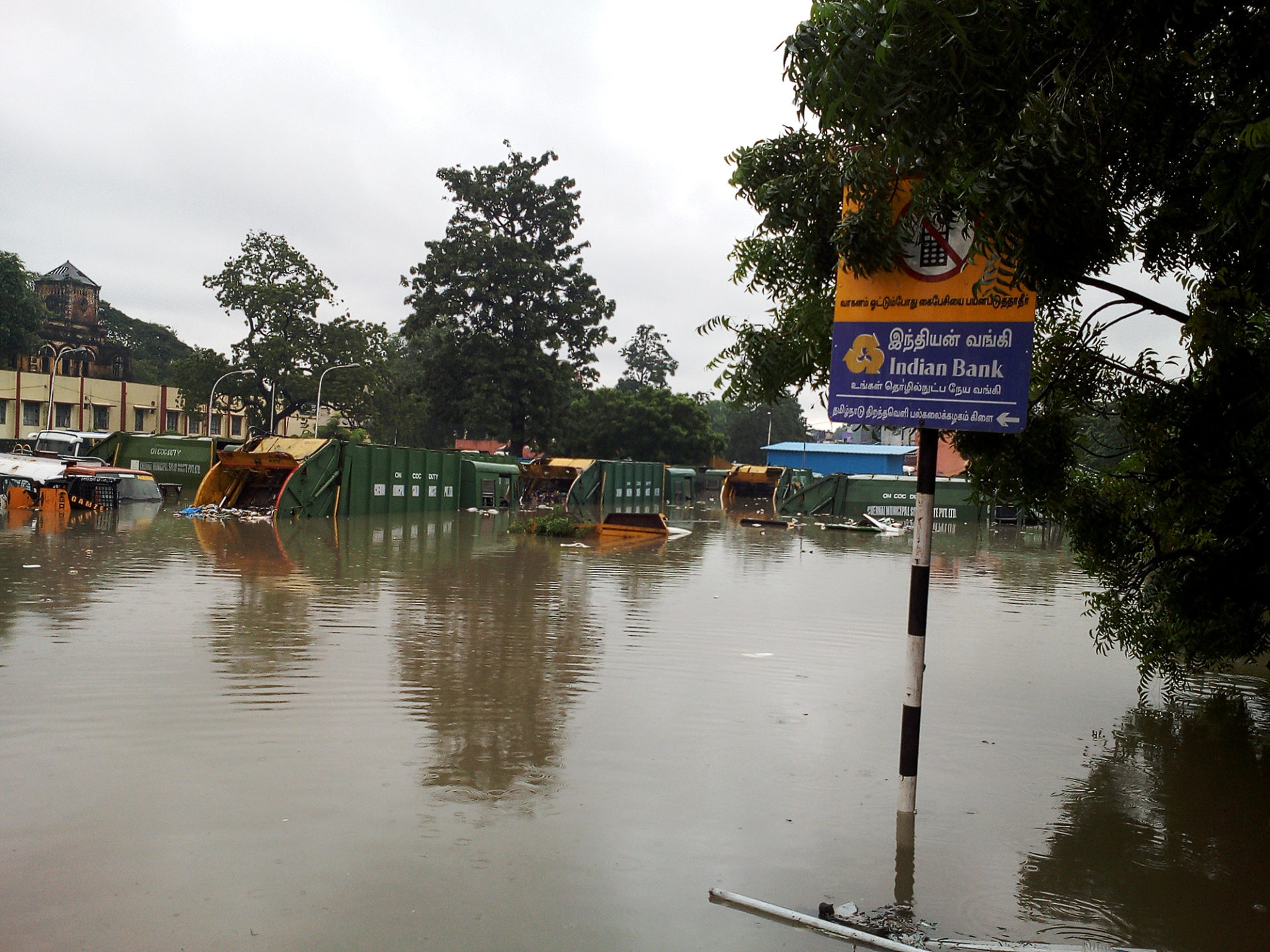 Imagine a conversation between a hypothetical house buyer and her mortgage lender sometime in the near future. Say the buyer has perfect credit, enough cash to pay a deposit of a third of the sales price, and a steady job, and yet the mortgage lender says no. The problem is not the buyer, but the building itself: the house lies below the bank’s “blue line”.

That blue line marks where sea level is expected to encroach within the next several decades, flooding the buyer’s dream home. By 2020, most insurance companies refused to grant policies to most homes that lay within the flood and coastal sea-level rise zones. Soon after, banks began conducting sea-level risk assessments before granting mortgages to buyers.

This story is imagined, but our present is rapidly catching up to the future.

People are constantly assessing risk, whether they are gauging the speed of cars while pulling into a lane of traffic, or smelling a carton of milk to check whether it has spoilt. At its most basic level, risk management is the process of evaluating information, considering potential consequences, and acting accordingly. In the story above, a mortgage lender is making a risk assessment about a home’s potential to be underwater, and this assessment impacts the house buyer.

At larger scales, for cities, states, and even the planet, collective risk decisions are made all the time. Cities set local speed limits to maintain safe driving conditions. Countries establish food safety standards, such as milk pasteurisation, to protect public health. International accords are made to lessen the risks of damaging the ozone layer.

These decisions are not simple, and getting them right is a tricky task. Furthermore, in a context of blazingly fast social, economic, and political change – especially in a rapidly developing world – determining where and how to deploy finite resources is a gamble. But conceptual tools are on the horizon for navigating this new complex, risk-riddled terrain.

On the risk continuum

Historically, “risk management” has been used in a variety of disciplines, ranging from engineering to finance. Global interconnected risks, or so-called systemic risks, have received much more attention in recent years due to the tightening connections between people and the environment.

For example, the recent Ebola crisis in West Africa could more quickly and easily impact people in distant locations due to the combination of local and global public health failures, and the sheer prevalence of air travel. The Arab Spring in 2011 is strongly related to global food price volatility in the preceding years and months: an example of two seemingly distant crises connected over time and space, with the earlier events setting the stage for later ones. 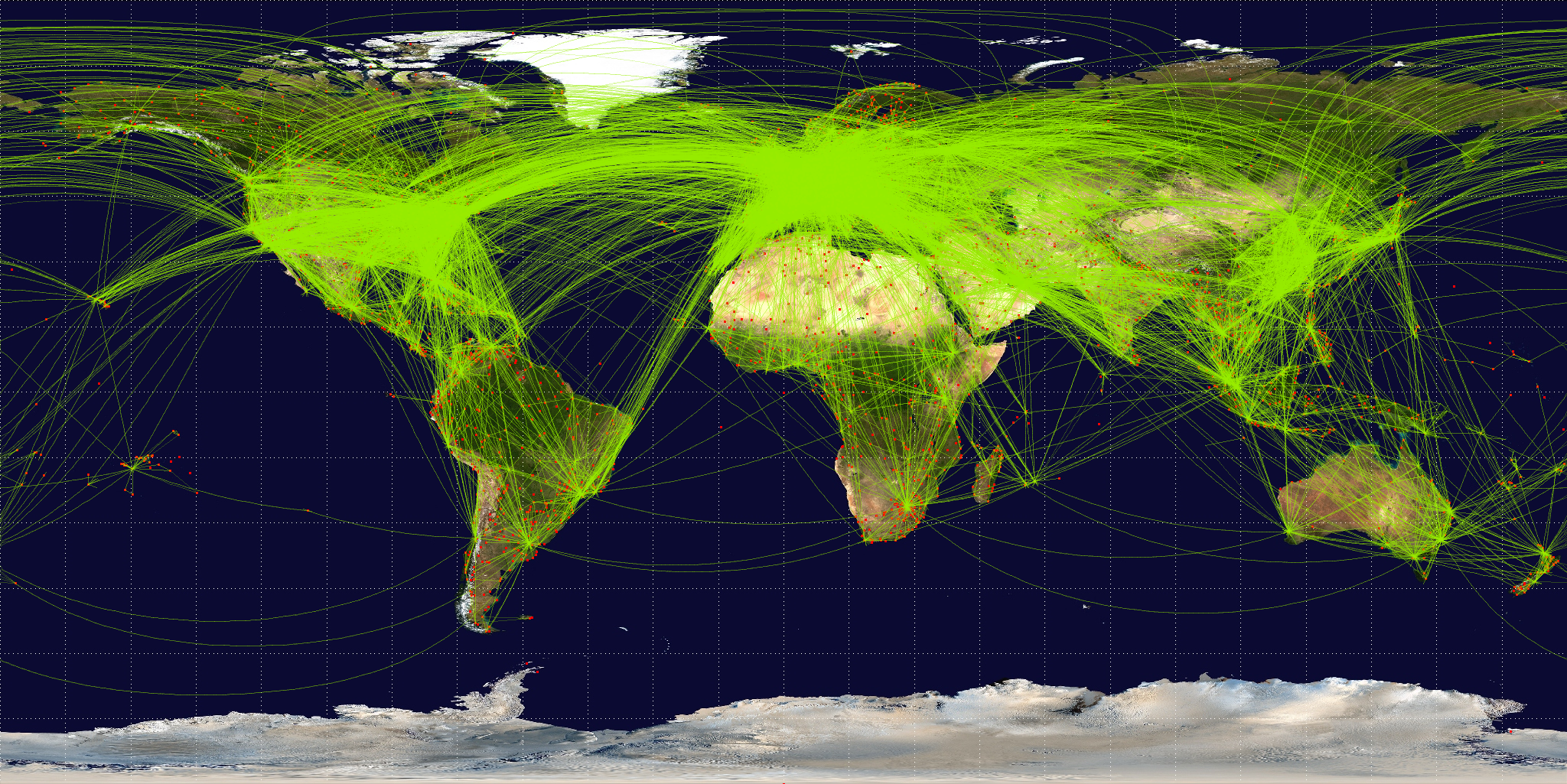 These two examples of risk are “complex”. Aspects of risk can be organised along a spectrum: from simple to complicated to complex.

Simple risks are easy to understand, can be categorised, and responded to, such as a potential flat tyre on a car. The phrase “best practice” may be used when considering simple risks because identifying the best, or most preferred option, is possible. In this case, best practice is to keep a car’s tyres inflated, as well as avoiding nails on the road and keeping tools in the car.

A complicated risk is a combination of many simple components. Here, a “good practice” is often the best that can be expected for managing these risks. For example, a space-bound rocket exploding on a launch pad is a complicated risk because many interconnected components that have their own simple risks are part of the launch process. However, these simple risks can nearly all be quantified and managed. And that makes addressing the larger overall complicated risk seem possible.

Complex risks cannot be broken down in the same way as simple or complicated risks. In order to explore a complex risk, it must be “sensed” rather than “reduced”.

Imagine being in a prisoner-of-war camp, and you must figure out how to escape. This involves working out how to get past guard towers, fences, police and military staff on the outside, and even potentially unfriendly civilians. Then you would need to find food, shelter, new clothes, transport, and other necessities. Each step would create new challenges and new opportunities – a constantly evolving set of risks. The only way to manage this situation is to sense your way as you go. In this and other complex risk situations, any response is likely to evolve and to be unique to that situation; in other words, “best practice” doesn’t work here.

Complex risks cannot be broken down in the same way as simple or complicated risks.

Complex systems are more than the sum of their parts. Interacting components in a complex system create new things that are different to what the system started with, sometimes surprisingly so.

Such systems adapt to changes, and as they do they move through different iterations of how they are composed. Step-by-step linear and direct approaches – which tend to be used in traditional risk management – do not necessarily work when it comes to managing such complex systems. Complex risks instead require approaches that consider inherent surprises and that take a big-picture perspective.

Another way to assess risk is to calculate the certainty (or uncertainty) of an event. This certainty can have attributes such as the likelihood of an event and its possible outcomes. In other words, is this risk a real possibility and if so what might happen as a result of this event?

In a situation where the certainty of an event is high, people can predict what will happen and react accordingly, perhaps by protecting certain resources or adapting their behaviours to fit the event that they know is on the horizon. But as the likelihood and outcome of events become increasingly uncertain and unknown, traditional risk-management methods are likely to become inadequate – if not irrelevant – for figuring out how to deal with these events.

It is typical to separate “environmental issues” from other issues such as political, economic, societal, cultural, and so forth. But the environment forms the basis for the material world: food is grown with water and in soil, modern telecommunications are based on infrastructure that requires massive amounts of energy – human societies can be greatly affected by disasters.

Furthermore, the global environmental context has remained broadly the same for all of modern human civilisation. The recognition of the Anthropocene – the Age of Humans, where people’s behaviours and actions can add up to global-scale changes – is a recognition that humanity is departing this baseline environmental context from which global civilisation has emerged and to which humanity is uniquely well-adapted.

First, they emerge from human-driven processes. These could be anything from cutting down a forest in order to open up more farmland to using fossil fuels for transportation and electricity, which increases emissions of carbon dioxide and other greenhouse gases that drive climate change.

Oil palm plantation in Malaysia. Palm oil is used in products from soap and cosmetics to food and snacks. The increasing demand for palm oil around the world is causing widespread deforestation, making way for vast monocultures of oil palms, in Malaysia, Borneo, and elsewhere. Photo: N. Desagher/Azote

Second, these novel risks tend to have global social-ecological connectivity. An example could be consumers in Sweden who want to eat shrimps, and whose demand drives the clearing of mangroves and expansion of shrimp farms in Vietnam. That in turn leads to increased exposure of coastal Vietnamese communities to tropical storms because the mangroves are not there to protect them anymore. These networks of interactions of people around the world have both local and planetary consequences.

Third, these risks exhibit complex interplay across different scales. Decisions that humans seem to be collectively making now, such as emitting carbon into the atmosphere, will have impacts for thousands of years. Likewise, humans can now discover and fully exploit a new resource, for example a new fish species or a deposit of commercially valuable minerals, in a few years. Decreased cereal production on a local scale can cause food prices to rise globally, with consequences for the local community as food becomes too expensive.

Farmers in India rely on groundwater for their water use. This water then evaporates into the atmosphere, where it gets carried to East Africa to fall again as rain. This process could be interrupted if the groundwater is unexpectedly and rapidly drained. In other words, Indian farmers might unexpectedly discover their groundwater pumps can’t reach the water table any longer, leaving them unable to irrigate their fields. This eliminates the supply of evaporation and could lead to a significant depletion in East African rainfall, with corresponding consequences for productivity of local ecosystem services, such as water for animals, agriculture, trees, and more. Such an interruption in rainfall could also have regional impacts: it might trigger migration and conflict over resources. The unexpected outcome might be the loss of livestock in Somaliland. 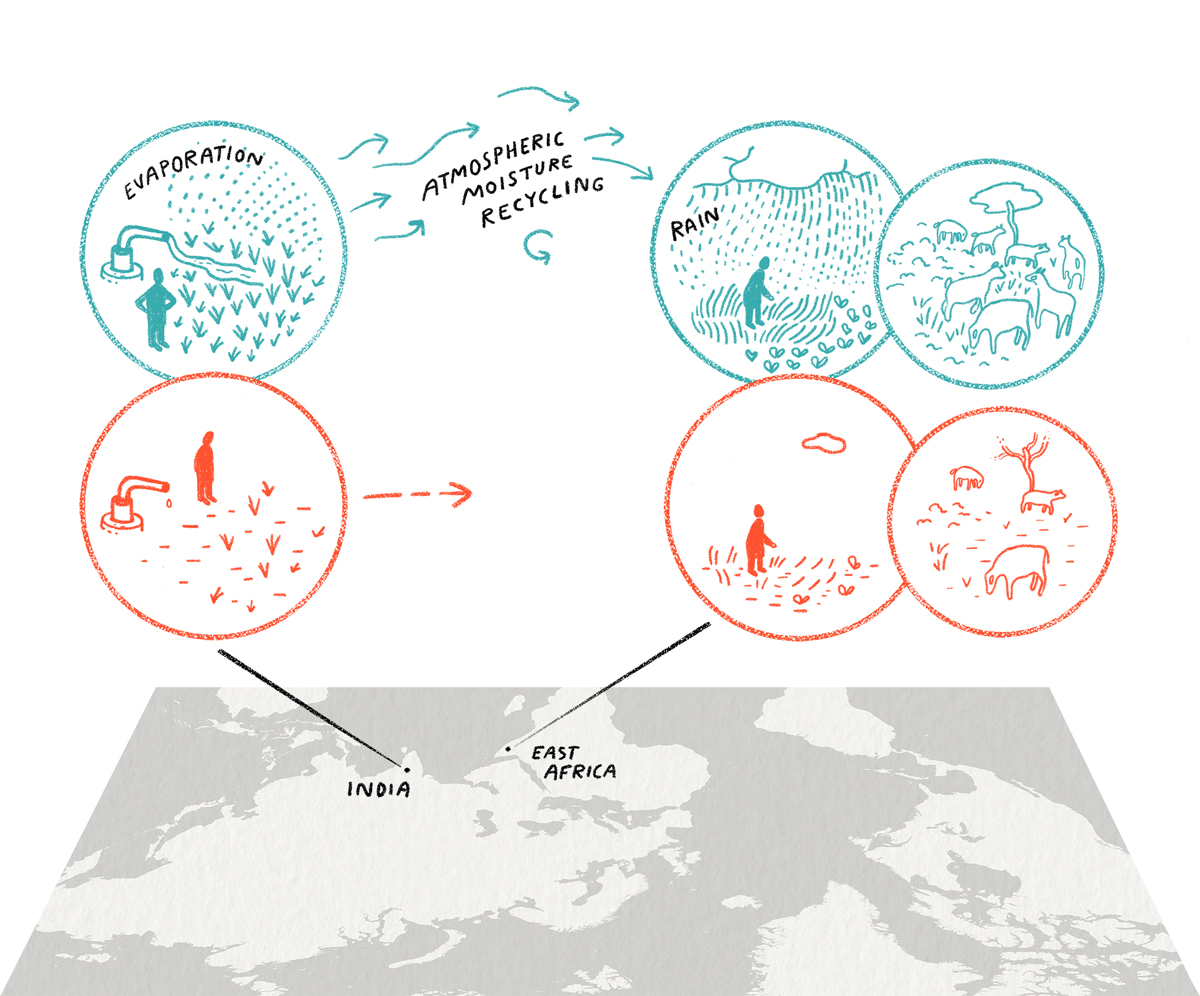 Farmers pumping groundwater in India could affect rainfall thousands of kilometres away in East Africa, with knock-on impacts for livestock herders there. Illustration: E. Wikander/Azote.

How can policymakers and development practitioners make practical use of these insights? Identifying a particular risk or activity is the first step, such as livestock production in Somaliland. Second, this risk needs to be connected to its broader system, so that the interacting components can be revealed and understood. The three characteristics described above – human-driven processes that interact with global, social-ecological connectivity and exhibit complex, cross-scale interplay – are important guides on what to look for.

Once the system starts to be characterised, policymakers and development practitioners can build capacity in the system to monitor and respond to changes. To use the moisture recycling example, this could mean improving communication among agricultural extension offices, meteorological monitoring systems, and perhaps even early warning systems connected to groundwater monitors in India, in order to contribute to drought prevention in East Africa.

This sort of “outside the box” approach will be necessary for managing both risk and resilience in the Anthropocene.

As the Anthropocene unfolds, navigating these risks will require looking at changes that happen over years, decades, centuries, or even millennia. And that will have implications for everyone, from the fictional home buyer trying to get a mortgage to livestock herders in Somaliland trying to understand whether their animals will find enough vegetation to eat.

Researchers puzzled out how to include dryland livestock herders in the global insurance market. Their next challenge is to stay in balance with a changing ecosystem.