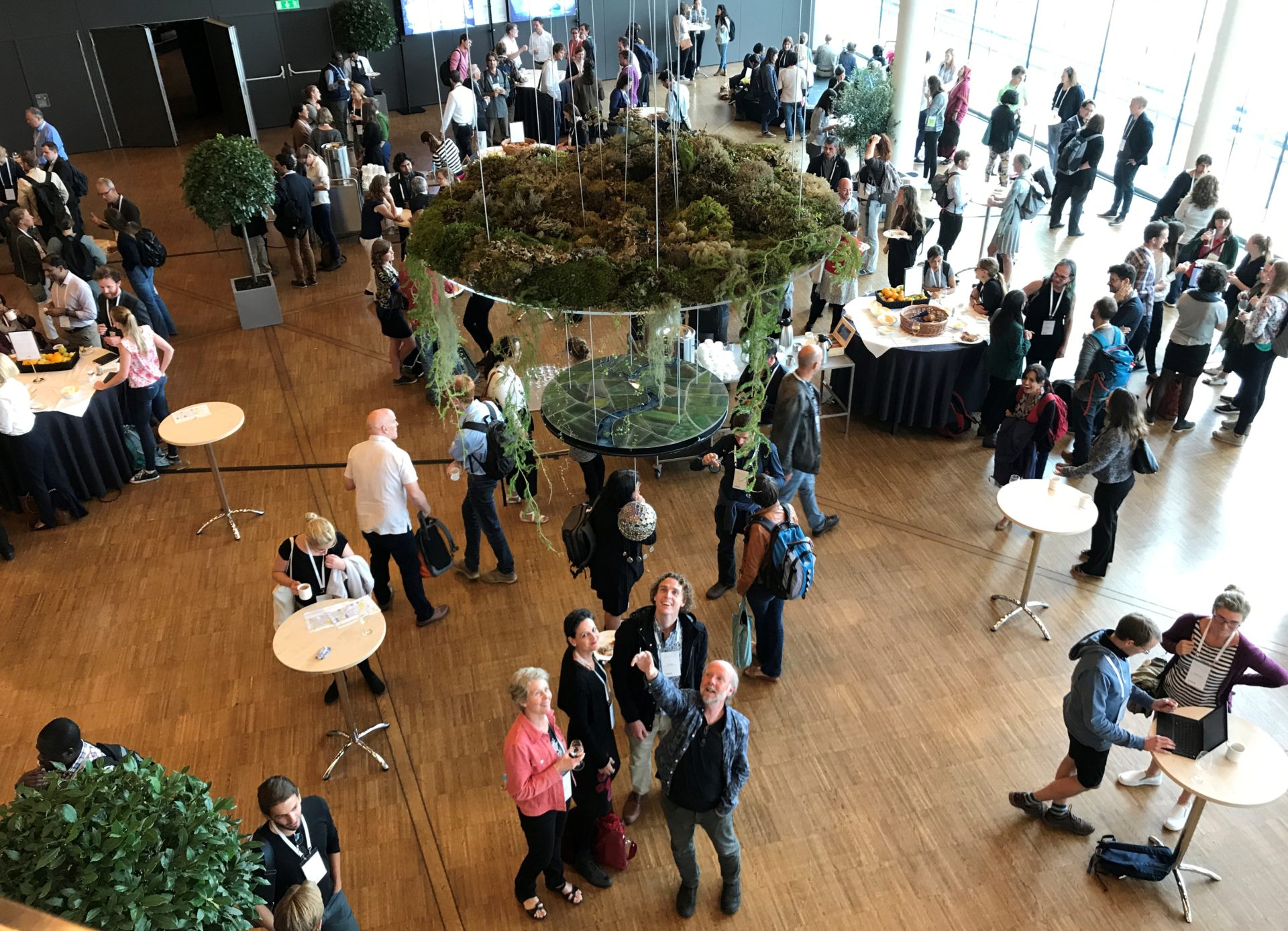 Editors’ Note: This text was originally published on Zilient, a news and community platform, on 5 September 2017.

Norwegian artist Tone Bjordam was moved to tears when she heard an eminent Swedish scientist explain the relationships between nature, society, and the economy at a 2013 workshop in Uruguay.

Displaying a diagram of three concentric circles, with the economy in the middle and nature on the outside, Carl Folke, science director of the Stockholm Resilience Centre, argued that if the economy collapses, society and nature will likely survive, and if society implodes, then nature can stay intact.

But if nature – the planet’s ecosystems, wildlife and climate – descend into chaos, then so will the society and economy it supports. 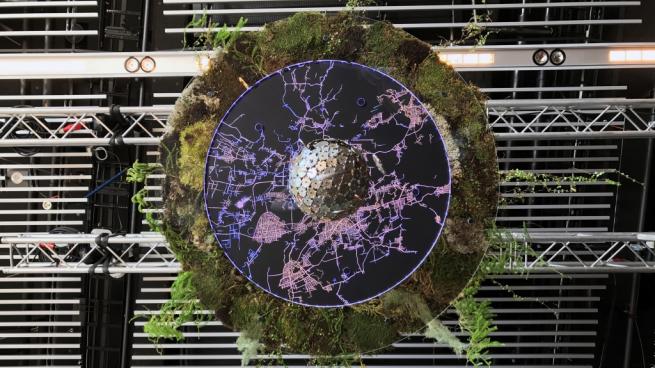 “He said, ‘I have never seen anyone react so emotionally to something as dry and boring as this!’,” recalled Bjordam at a recent conference in Stockholm where scientists discussed ways to keep the planet and its inhabitants healthy and in balance.

In a hall next door hung the inspiration from her Latin America experience – an installation suspended from the ceiling.

A large circle covered in vegetation shelters a smaller disc mounted with a river and fields above and a maze of city lights below, while beneath the two glitters a small globe fashioned of money with coins dripping from the bottom.

“If you cut the wires that hold nature up, everything falls apart,” said Bjordam.

The artist spends a good part of her time outdoors observing and photographing landscapes of mountains, lakes and forests, and the rest in her studio, making paintings, graphic art and sculptures informed by the natural sciences.

Bjordam believes her art work can help bring the beauty and fragility of our environment – and by extension, the need to protect it – to the public.

“Real engagement often starts with an interesting and fantastic experience in nature or through art,” she told scientific researchers in Sweden last month.

Nor does the 42-year-old artist pay mere lip service to biology, chemistry and physics – she has collaborated with scientists since one saw her 2009 video piece “Coral” in an art museum.

“As a scientist, you’re trying to capture the essence of something in the world in a way that is really appealing, that nobody has thought of, that may change the way people look at it – and that is exactly what artists do,” said Marten Scheffer, a professor at Wageningen University and director of the South American Institute for Resilience and Sustainability Studies.

In 2012, Scheffer and Bjordam produced an art video, “Critical Transitions”, which portrays processes constantly going on around us, and how a system can build up to a tipping point where it suddenly shifts. Three sequences, like abstract paintings in motion or landscapes in flux, are set to music composed and played by the Dutch scientist.

Scheffer has since worked with mathematicians crunching data to see if it is possible to identify a “critical transition” in the midst of turbulence, like the political, economic and climate instability the world is experiencing today.

Brigitte Baptiste, director of the Alexander von Humboldt Biological Resources Research Institute in Colombia, has direct experience of such a transition, having lived amidst her country’s civil war that ground on for five decades.

The transgender ecologist says that, with a fragile peace accord now in place, Colombia must change the way it approaches its future to avoid a repetition of conflict.

“We want to avoid a clash of truths,” she told the Stockholm conference. “We can live with a certain amount of uncertainty and ambiguity.”

Using art, music and new languages to portray the choices Colombia faces “gives us a softer way of seeing reality that helps us to build compromise”, said Baptiste.

To that end, the institute has produced a set of tarot cards featuring Colombian plants and animals, to help people think differently about themselves and nature. And in December, it will start publishing a sci-fi graphic novel for young readers called “The Resilience Chronicles”.

“Art is going to be one of the most important, inspiring forces for building resilience in our countries,” said Baptiste, referring to the challenges facing Latin America. 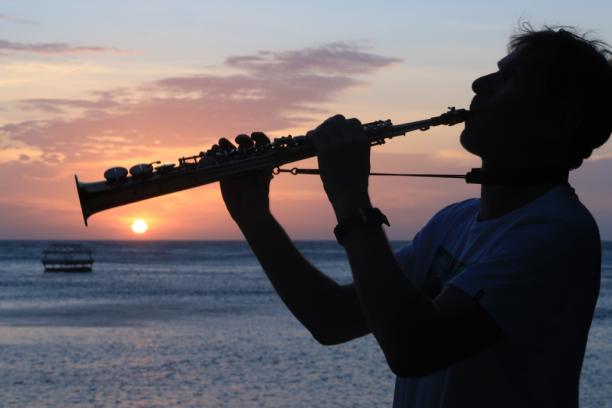 Swedish soprano saxophonist and composer Anders Paulsson believes similarly that music can build bridges between people – from children to a former U.N. secretary-general – and inspire them to care for the planet and its natural resources.

After working as a volunteer diver counting invertebrates on Danjugan, a once-endangered coral reef in the Philippines, he co-founded an organisation called Coral Guardians.

It organises events combining science and music, where individuals meet to discuss the threats to coral reefs and ways to protect them.

After a performance held in a town square near the Danjugan Sanctuary, “we heard stories that people who hadn’t spoken to each other for 10 years were actually speaking again,” said Paulsson.

At other concerts, scientists have felt the emotional energy of their work for the first time, and at an event with similar aims organised by the Tällberg Foundation, Kofi Annan played conga drums, he said. “That levels the field, so anybody can talk to anybody,” added the internationally renowned musician.

“We can live with a certain amount of uncertainty and ambiguity.”

On Danjugan island, the Philippine Reef and Rainforest Conservation Foundation runs camps for children using coral reefs and the ocean as a marine classroom.

“It will take 10 years before these kids are community leaders, but eventually they will come with a different perspective than their parents,” Paulsson told the Thomson Reuters Foundation.

Following the world premiere in April of “Coral Symphony – Kumulipo Reflections”, a tone poem composed by Paulsson after hearing a native Hawaiian chant telling how creation began with the coral polyp, Coral Guardians plans to work on a 10-year project with Conservation International, visiting coral reefs and collaborating with local musicians.

“I would like to hear some of this music on Top 40 radio,” said the saxophonist, smiling.

“If someone is to sing about conservation and in a poetic way, not just a scientific way, and people… actually sing along, that would be a shift in consciousness.”

A recent gathering in Stockholm brought together academic, artistic, and practitioner communities to discuss the latest in resilience research, and what might be next.

With only a few days to go before the start of the science conference “Resilience Frontiers for Global Sustainability”, Stockholm Resilience Centre science director Carl Folke reflects: why resilience?