Editors’ note: We polled our colleagues (very non-scientifically) for their favourite reads published in 2017. In addition to some of the most recent science fiction and non-fiction, they offered a few foundational texts for resilience thinking as well. Read on! 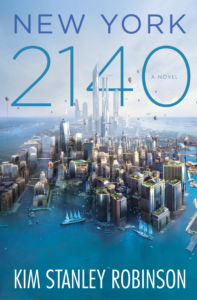 The year is 2140. Climate change has caused sea levels to rise 50 feet (over 15 metres), flooding many major cities. New York has turned into the new Venice, with canals replacing its streets, connecting the islands of sky scrapers. Author and geologist Kim Stanley Robinson weaves together several narrative strands about people who go about their lives in this waterlogged environment.

Robinson makes room for the complexities of human beings as well as of the natural world we depend on. The book describes how the people living in one of the city’s skyscraper islands work to build better lives and cope with the challenges of climate change in a world where capitalism has failed, causing a collapse of societies as we know them today.

“I think New York 2140 was the best resilience read of 2017. It portrays a future we don’t want, where greenhouse gas emissions are reduced too slowly to avoid dangerous climate change. A central theme of the book is resilience, and how people need to work together to transform society and build better communities and a better relationship with the planet,” comments Garry Peterson of the Stockholm Resilience Centre (SRC).

Doughnut Economics: Seven Ways to Think Like a 21st-Century Economist 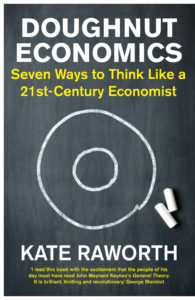 Sit back and let economist Kate Raworth give you a brief but oh-so-necessary history of the economic theories we live by today. “That chapter alone is a must-read for anyone working with the challenges of inequality, environmental degradation, and the governance and management systems we need to take us forward,” says Louise Hård af Segerstad, communications strategist at SRC and a co-director of communications group Albaeco. “It explains a lot.”

Then follow Raworth’s transformation of the past and current system, to a new vision for the future, through 7 diagrams. Her clever and communicative message in short: we need to make sure that the purpose, governance, networks, ownership, and finance of a company or an actor all work towards the question of the 21st century: How many benefits can we layer into the way we design X? On top of these five categories, Raworth gives us two ways to think: “Create to Regenerate”, “Design to Distribute”.

“My big take-home message of this book is that we need to see economics as a tool to help us stay within the safe and just operating space that is described by the nine planetary boundaries ”, says Hård af Segerstad, while delivering on multiple goals for social welfare. “Raworth presents a comprehensive, communicative, and compelling overview of how to think as we go forward.”

Scale: The Universal Laws of Growth, Innovation, Sustainability, and the Pace of Life in Organisms, Cities, Economies, and Companies 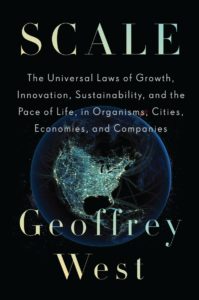 A blue whale’s heart will beat about one and half billion times in its lifespan of nearly a century. A mouse’s heart might average the same number of beats over its lifetime of only a few years. Could these phenomena be linked?

And why is it easy to kill a company, yet difficult to kill a city? Only 61 of the companies that were on the Fortune 500 in 1955 remain on today’s list. Dresden, Nagasaki, and Hiroshima survived devastating fire and nuclear attacks in World War 2. How are these linked?

Theoretical physicist Geoffrey West’s book Scale attempts to answer these questions. He argues that complex systems, be it a city or the circulation system of a mouse, behave in a predictable and often surprisingly similar way when their sizes increase.

Dynamics is key, and the heart of the book is how complex systems use energy. But energy plays a surprisingly small role in the conceptual thinking of economists and social scientists, West observes. Taking his viewpoint provides insights into how to create livable cities, with no complex mathematics in sight, but with social-ecological framing front and centre.

Two classics and a classic-to-be

Resilience Thinking: Sustaining Ecosystems and People in a Changing World 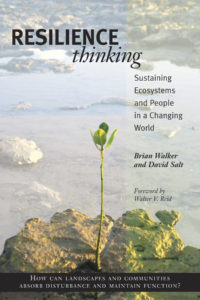 Brian Walker and David Salt account for the ins and outs of resilience thinking and provide what have become classic examples to illustrate it. 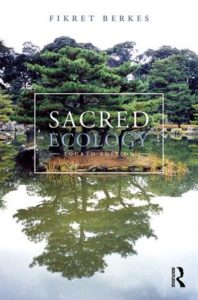 Fikret Berkes’ Sacred Ecology offers a general science take on resilience and traditional ecological knowledge. The textbook illustrates how local knowledge provides insights into resilient ways of doing things, and how it can complement scientific knowledge. 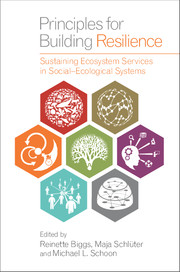 Reinette Biggs and her colleagues explain seven principles for building resilience in social-ecological systems, connecting the principles to case studies from around the world.

“Clear concepts, structure, and logic make this work a coherent and integrated multi-authored book. It is an essential read for those who care about the future of our planet.” Conservation Biology