Different communities work with resilience: to clarify, quantify, and apply it, and more. This week in Stockholm brought together academic researchers, sculptors, development and aid agency practitioners, lawyers, and others from around the world to discuss the state of the art of resilience thinking at the Resilience 2017 conference.

Held every three years, this year’s conference seamlessly blended art, music, and culture with the social and natural sciences. What emerged was a rich, kaleidoscopic experience heavy on empathy. At the same time, the heart of the conference remained the reassuring familiarity of data, methods, and conclusions. As Lisen Schultz, who runs the biosphere stewardship theme at the Stockholm Resilience Centre, told Swedish Radio, Resilience 2017 was a conference of nerds.

Below is a collection of quotes from the conference, which encapsulate key concepts and new questions raised from the many perspectives present.

Stockholm Resilience Centre’s Carl Folke opened the conference with Katrina Brown of the University of Exeter, in a plenary that laid out the state of resilience science and where this connects to the state of the planet. Folke challenged those present to think about the potential for a New Renaissance, in which humans recognise the consequences of actions. “When you get increased variance, flickering, slowing down, … we’re very likely to have tipping points, or new things taking off rapidly. There is a big opportunity space opening up right now and I think the people in this room have a big role to play in that opportunity space to help find pathways into the future.”

Norwegian artist Tone Bjordam reflected on a conversation she’d had with Folke that led to a signature sculpture that embeds imagery of society and the economy in the mossy green sphere of nature, which hung in the conference space above the heads of participants meeting below.

Melanie Goodchild explained that the worldview of many indigenous peoples embodies the reconnection to nature for which resilience scientists are calling. Goodchild, who is Anishinaabe, from Biigtigong Nishnaabeg and Ketegaunseebee First Nations in northern Ontario, Canada, and a PhD candidate at University of Waterloo, emphasised the importance of working together with knowledge keepers in these communities. “We need to fall back in love with Mother Earth,” she said, and this can be aided by worldviews in which people are “taught to respect Mother Earth and practice humility.”

“For the indigenous cultures, they are not stewarding the land – the land is stewarding them; the land talks to them and tells them what to do,” said Terry Chapin of the University of Alaska, Fairbanks. Chapin highlighted the differences between western knowledge systems, and their focus on reductionism leading to solutions that reduce waste or minimise fossil fuels, compared with indigenous knowledge systems which have future generations at the heart of the system in the first place.

Sundaa Bridgett-Jones, Senior Associate Director at the Rockefeller Foundation, joked about the array of frameworks out there on resilience and development within academia and outside it. The reality is that getting development agencies and foundations to adopt new frameworks takes a lot of legwork and will always face resistance. Development frameworks are surprisingly resilient and this can be good or bad. Indeed, a thread running through the conference was that resilience is the state of a system and, unlike sustainability, it is not necessarily a desired state.

“It’s important to remember that resilience isn’t always a good thing,” Johan Rockström, director of the Stockholm Resilience Centre, reminded us at the closing plenary. The challenge isn’t only to build resilience but also to “to identify the ‘bad’, unwanted resilience in systems, and break it down”.

Marten Scheffer extolled the virtues of “losing time” in his opening plenary on day two of the conference, a session that captured the heart of resilience thinking and approaches to resilience research. Scheffer, an ecologist at Wageningen University, riffed on the parallels between artistic and scientific creativity. They come from the same place and require the same kind of nourishment. From this he dived into the unmentionable — the story of scientific insight is only half told. Academics are steeped in the culture of data collection, methods, and analysis. But where does the magical spark come from to allow the essential process of combining old ideas into new insights. He quoted The Economist’s 2011 article on the Anthropocene: “Humans have changed the way the world works. Now they have to change the way they think about it too.”

Brigitte Baptiste, the director of the Instituto de Investigación de Recursos Biológicos Alexander von Humboldt in Colombia, told the conference participants to think about uncertainty and encouraged “queering ecology” to loosen our definitions of systems, among other things, and to think differently about our world and ourselves, in that same wide-ranging plenary discussion on creativity with Scheffer. The high-profile transgendered ecologist spoke about “blurred biologies”, in addressing “greening peace” in relationship to the post-conflict ecology of her country. 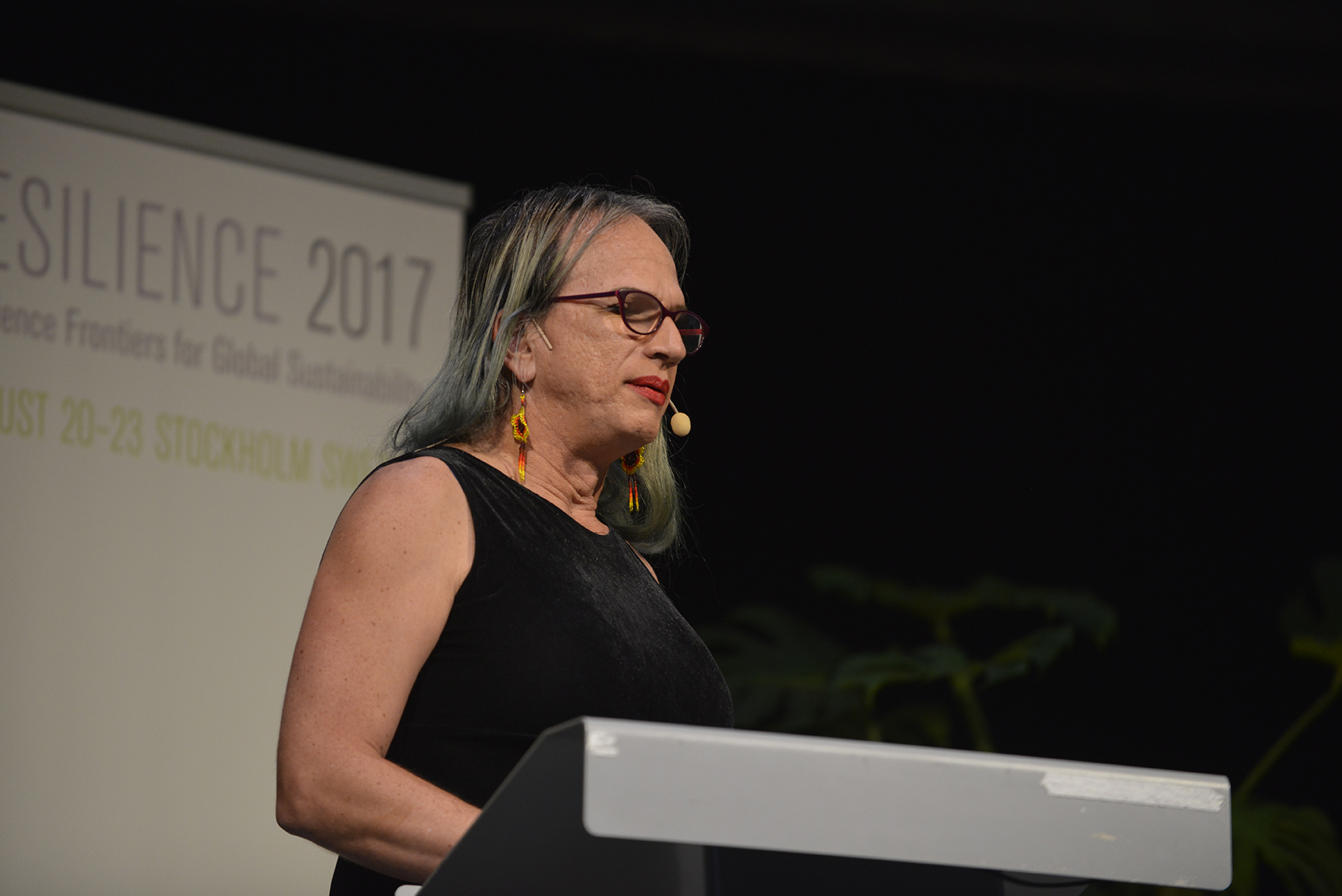 Beth Fulton of CSIRO pointed out that our behaviour is perhaps surprisingly predictable. And that we are a part of the planet’s biosphere, something we need to recall more often, many of the speakers underscored. “It isn’t about the needs of people versus the needs of the environment, but about harmonising the two,” said Gertrude Fester, professor of sociology at the Sol Plaatje University in South Africa.

With only a few days to go before the start of the science conference “Resilience Frontiers for Global Sustainability”, Stockholm Resilience Centre science director Carl Folke reflects: why resilience?

Researchers have put together new puzzle pieces in the poverty traps framework, in order to find ways to look at different possible solutions for development. Adding nature and culture, they find, changes everything.