Editor’s note: In collaboration with the Global Resilience Partnership (GRP), Rethink editor Marika Haeggman imagines a future where resilience building has been put into practice through multiple pathways identified by the GRP community. Here is the imagined future of one woman, inspired by the real stories of many and an idea of what a resilient future could look like in 2050, if we push forward on those pathway priorities.

A drought hit hard last year. It had been a testing time, but Tariro and her farm had made it through. It was now a decade since she had taken over from her parents – managing a farm that had been brought back from being on the verge of collapse during her childhood.

She remembered the dry dust of the red soil, and how every bush and tree had been removed to make way for the spindly single file crops that failed year after year. It was the same on neighbouring farms. Her mother and father were desperate for change, and through an international partnership for knowledge exchange they found a way. Bringing back old wisdom to the farm they planted various trees, bushes and plants in and around the crops. This set in motion a cycle to resuscitate the relationship between roots, nutrients, soil and sun, rejuvenating soil health. A plethora of fascinating insects returned to the once scorched farm. Tariro remembered when she first saw the fat worms twisting and squiggling, turning the soil fertile again. Some of their neighbours thought it was madness to use land on the farm to grow plants that weren’t needed at the market. But it had been the reversal of their fortunes. And the reason why Tariro was still there. 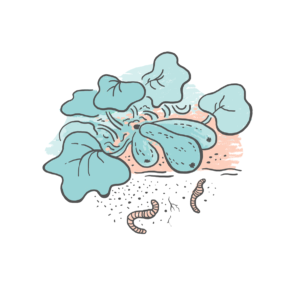 Droughts were still a reality. But now they could be managed. Tariro had irrigation for some of her crops, and water runoff from the road by her field was collected in a small dam. She had been able to plan her use of the water and save a decent proportion of her harvest. Solutions like that one – keeping the roads intact and channelling water to where it was useful – had been created in many places across the world. Mostly in places that suffered from the paradoxical double burden of droughts and floods.

In regions where such structures were still missing, roads sometimes flooded and farmers in the most remote areas risked being cut off from markets, amenities, and services for weeks at a time. Sometimes years.

Tariro felt fortunate to have been protected that season by insurance that helped pay parts of her loans. While most of her community had purchased affordable insurance policies, some families in neighbouring districts could not. It was distressing to see them struggle to make it through the year, initially with their crops, then their harvests, and then with their finances. Tariro and her community, on the other hand, had been able to cut their losses somewhat.

Thankfully, the success of the district’s insurance scheme had generated enough cooperative capital that year to enable additional households to join. Promising a brighter future in the coming years for more women, children, and men.

This year the rains have come in as expected, so far. Tariro’s fields are green and growing increasingly lush as the fruit tree canopies fill with leaves and flowers and the squash plants make their way crawling across the ground. Through her grower-trader network she should soon be able to start bringing produce to market in just a couple of weeks. Technological developments in the 2020s and 2030s had made connections between farmers and markets fast and easy. Now, financial services to facilitate trade via secure transactions didn’t stack up unmanageable debt and were widely available, increasingly even in remote places. She found these links crucial for communicating with buyers. If there was a shock or a surprise with her harvests – for example from shifting weather or a pest outbreak – she could offer alternatives from her range of diverse crops. A real lifeline. Her parents had switched from monocropping a few decades ago, and when Tariro took over the farm, she continued in their footsteps.

She had also taken over their place in a network that talked with climate scientists and local authorities. A quarter of a million people were connected to her local chapter. There had been a surge of global training programmes and social initiatives exploring tech solutions in the mid-2020s. They had found good grounds to develop from and the legacy of their programmes was growing today.

In the early days, local people met in dialogue with companies, scientists, and community organisations – sharing and building knowledge and new networks. These meetings had been so important for all of them in developing and using the technology in a meaningful way. They created incredible new technologies together that meant Tariro and her peers could take photos of their crops, soils, and skies, have them analysed and compared with weather data, and receive tailored updates specifically for their communities. Now it was second nature to meet up and share experiences and ideas with each other, but it hadn’t been that way in the not so distant past. Her parents hadn’t had the same opportunities at her age.

She knew a lot had been done in the 2020s to secure the agricultural sector, making it resilient in the face of increasing unpredictability. Farmers across the world had adapted their crops to fit their local environments, old crop varieties had made comebacks, and water- and input-efficient farming methods had been widely adopted. 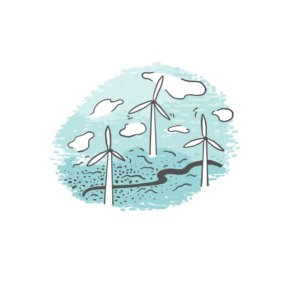 Her farm is flourishing on the outskirts of the city. She likes the quiet here, away from the hustle and bustle of downtown. Her sister lives in the city, so she goes there often enough to visit. Though it is noisier and busier than the borders of the suburbs, she knows it has vastly improved in the last few decades. New and simple forms of building infrastructure – such as modular roofing systems – and improvements to old buildings mean that heatwaves don’t hit as hard anymore. And, because the national and city authorities now manage the ground water in tandem with coastal and local river systems, their drinking water is clean.

This city is faring better than some, where people are periodically still evacuated to avoid the worst effects of heatwaves or extreme levels of particulate air pollution. Through the community-led resilience action plan for the urban metropolis, buildings have been adapted, and the city’s streets are green with trees and bushes. This is part of the wider scheme to use nature to manage temperature shifts and air pollution as well as mental health and stress levels. Despite these urban improvements, she prefers her greenbelt community and the open spaces, and so she stays in their family home.

A few kilometres from her house is the ocean. There was a time when her parents had considered selling to make their way further inland. They had feared the escalating extreme weather, the risk of tsunami-scale waves and the visible coastline erosion. But she felt safe now. There had been a groundswell of internationally funded community-led work to restore the coastline, replanting mangrove forests and safeguarding the remaining coral reefs. It generated impressive results in a few short years. On weekends she sometimes travels to the coast, to swim and buy fresh crabs from the mangroves. Fish and shellfish are not everyday food, but thanks to the local restoration efforts – and to the expansion of protected areas in the seas – fish populations are viable. There are places for crabs, mussels, and other creatures to live and grow among the steady heart root system of the flourishing mangroves. 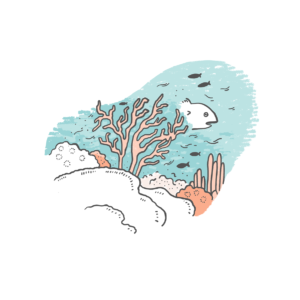 Sometimes it takes her a moment to remember how close this coastline, this community, this city came to collapse. It was the same in cities all over the world. But it was more intense, more rapid, and more terrifyingly perilous for her parents and those in homes like theirs. There wasn’t insurance or solid governance or finance reaching the places that were on the frontlines of the climate emergency.

There was global protest at that time, fuelled by the young. Children, teenagers, and young people had gathered on every continent. Their eyes open and their minds more agile, they had seen where the world was heading, many of them already living with the impacts of the climate emergency, and they were not going to sit idly by. Her parents had instigated marches in their district.

Faced with the coming generation’s impatience, unforgiving insistence, and capacity for imagination, world leaders, businesses, and individuals had converged in 2020 to turn the tides. It was a joint endeavour by the global community, to keep their noses above water and look their children in the eye. It had taken the concerted efforts of the world’s nations, and substantial investments from public and private sectors. It had been touch-and-go for a while, but the world’s nations had followed through on the bulk of the Paris climate agreement to meet their financial commitments and push through to reach the global goals.

Tariro smiles at the memory of her parents’ tales. She looks out over her field. The sun is shining and the day is warming up. She stands up to inspect the squash bed for pests before it gets too hot.

This text has been inspired by a range of insights, experiences, and evidence from the Global Resilience Partnership, specifically the Resilience Insights 2019 report and the 2020-2050 policy roadmap outlined in the Marrakech Partnership for Global Climate Action (MPGCA) Climate Action Pathway: Resilience and Adaptation.

Links to detailed case studies on some of the  initiatives that served as inspiration for the story:

Mangrove forests protect coastal communities from floods and provide livelihoods, resources, and many other functions, but they are one of the world’s most threatened ecosystems. Across the globe, different initiatives are now working to secure these vital watery forests.

How one team learned to change its traditional views on development through understanding complex systems in Niger.